LOVE, AMY: AN ACCIDENTAL MEMOIR TOLD IN NEWSLETTERS FROM CHINA 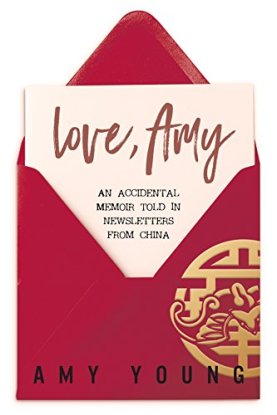 Amy Young shares her life as a single English as a Second Language teacher in China. Her early years in China (mid-nineties) were spent at the Sichuan College of Education. This memoir is shared through her monthly newsletters to her supporters in the United States. This was an interesting time to be in China as the country was changing drastically from a poor quiet country who opened it’s gates wider to “foreigners” allowing more “western” influences to try to take root. The reader has the chance to “see” China during those transition years. Amy’s letters are fun and humorous as she relates the cultural differences in a loving way. She shares her traumatic experience of almost dying in a Chinese hospital and how she recovered and then chose to return afterwards. But, this book isn’t just a memoir, it’s a ‘how to’ book on writing newsletters. Amy shares how to write a better newsletter from what she has learned and from others who have read/written countless newsletters written by others.

When I first heard about Amy’ health issues in China, I wanted to know more. Here was someone who also experienced trauma in China and not just survived to tell about it, but thrived and returned. Someone I could relate to. I was pleasantly surprised by the fact that it wasn’t just a memoir – though I do love reading memoirs of people who have lived overseas. I felt that her addition of a ‘how-to’ manual for writing newsletters was a brilliant idea. After reading her book, I still think it’s brilliant, but also I’ll add inspiring. I vowed to never write another newsletter again – but instead to write heartfelt letters, with stories and fun unique ideas for interaction –  not facts and a report.

I definitely recommend this book to anyone who is in a position of writing newsletters. You’ll be inspired and challenged to write them in a different way. And, who knows, maybe you’ll even like writing them.

Amy has graciously offered to give away one copy of her book, LOVE AMY, AN ACCIDENTAL MEMOIR TOLD IN NEWSLETTERS FROM CHINA.

DETAILS:  Just simply leave a comment about why you’d like to read this book and your email address. I’m still “old school” in many ways, so I’ll just put names in a hat on July 7th and have one of my daughters pick out a name. I’ll make the announcement later that day and contact you via email to let you know.

DEADLINE:  July 7th at 10PM (let’s do US Eastern Time, as it is exactly 12 hours difference for me. So, easy to remember.)

10 thoughts on “Book Review & Give Away: LOVE, AMY: A MEMOIR TOLD IN NEWSLETTERS FROM CHINA”