Welcome to Part 3 of The Leaving Series. If you are just reading for the first time, you may want to go back and catch Part 1 and Part 2.

Today’s post if from another friend, who I have had the opportunity to work with on team. Christa, may look short when standing next to her husband, but she is full of life and energy. I think you’ll sense that today as you read what she would have liked to have taken with her when she left… 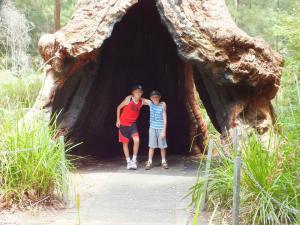 If you read the title and got upset then give me just one second because I am not talking about passing away, I am talking about moving. Of course it all depends on what the “it” is that you want to take with you. Our family lived in Shenyang, China for 12 years: both of our boys were born there and my husband and I were married there.

Before we left China there was quite a bit of debate about what everyone would be taking with us. When we decided to move, my children wanted to bring their best friends and every toy they had ever owned. My husband wanted to bring every book on the six bookcases in our home. I was much more unreasonable; I wanted to pack the Shenyang Imperial Palace, my best friends, my entire apartment, Starbucks, our school, every book in our home and every toy the boys had ever owned. We could negotiate on some of these items, but I did eventually have to admit that the Imperial Palace wouldn’t fit in my suitcase and I had to accept that skyping friends would be enough.

Our negotiation and moving process took an entire year. I started whittling down items as we used them. As I used items, I thought about whether I would give them to someone, sell them at the garage sale we would host, or pack them to take home. I would also figure out when would be the last time I would use that item then pack it in a box. Yes, in case you are wondering, I am a type A personality. Most stuff got left behind with beloved friends. When I visit now, I get to see my things being used by other people and I have to say it is one of the nicest feelings in the world.

We worked out that we couldn’t take things with us but we could take experiences with us. We could take parts of the culture and language with us. We also got to take a lot of love and care with us because people did so much for our family to make sure we each knew we were cared for as we said goodbye.

We did quite a few things to make moving easier for the boys. We knew they would miss China, so we made sure to take a long trip around the country to see important places before we left. We talked with the boys and asked them what their favorite places were in Shenyang. We visited those places one last time to say goodbye. We made sure to talk through it with them when we were going to a certain place for the last time. We also made sure to take photos of them in those places. We let them help with packing their own things, so that their things didn’t just disappear one day. We also encouraged them to think through which items they would give to friends and which they could give to children in need. This made leaving things behind more acceptable to them because it was an act of generosity.

We looked to the future in Australia by talking about living close to a part of our family, going to the beach and having a house with a yard. We talked to them about what they were looking forward to and then made sure to mention those positive things with enthusiasm when we could.

The boys wanted a dog in Australia and my husband and I both thought that was reasonable request and something that could help them get through the transition. They looked forward to having Bolt, (our dog), for months and he has helped through emotionally difficult times. He has helped me, too when I think about it.

The experiences, the culture and the language have stayed with us. We have made great Chinese friends here in Australia. I now write for a Chinese magazine here and we speak at a Chinese church in Perth. The boys talk about China often and have kept some of the language as well. The office Darren and I work at is a 5-minute walk from Chinatown in Perth and it is a wonderful way for us to stay connected to a place we all consider home or at least one of our homes. We celebrate the Chinese holidays and enjoy eating Chinese food as often as we can go to a restaurant or cook it. We also keep China in our home by having photos of friends from China, hanging scrolls and keeping things we brought with us from China displayed in the house.

Making sure to keep China a part of our lives, talking about it and participating in Chinese cultural events here in Perth has helped us to feel complete. There is no hole in our heart where China was because it has remained an integral part of what makes up our family. It is our children’s birthplace, and the place where Darren and I were married. Saying goodbye and moving to a new place cannot diminish how important China was and is to us.

Christa and her husband lived in China for 12 years. She met her husband, Darren, in China and they married there. Both of their two boys were born in China andlived there until 4 years ago. They moved to Australia, her husband’s home country, in 2010. She has been working with TCKs and other expats since moving to Australia. She is also the China promotions manager for Stacey College and Director of Student Services for Sheridan College. As part of her work she assists students in coming to Australia to study. You can visit her blog at staceycollege.com.

Thanks Christa for sharing today! So, readers, what do you want to take with you as you are preparing to leave? For those of you who have transitioned, what are other things that you were surprised about that may have followed you to the next destination? Share in the comments below!

6 thoughts on “The Leaving Series Part 3: You Can Take it with You”