Why did you adopt? asked an elderly Chinese lady at the playground. 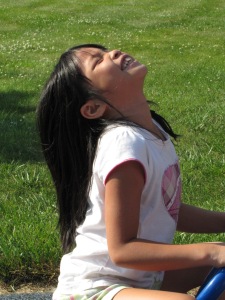 Why not? I asked her back.

She shrugged and said it was not Chinese culture to do such things. I nodded in understanding, but saddened that it wasn’t. This mini-conversation took place a little over five years ago in mainland China. The lady wasn’t mean or snide. She truly wanted to know why I would choose to adopt a child whose ancestors we know nothing about.

Why did you adopt? asked a young mother holding her crippled boy.

You know that I’m a Christian, and well it was God. I really honestly can’t explain it any other way. I answered back not sure how she would react to my response. We had just discussed therapy exercises that Jie Jie was doing. (In case you are new, Jie Jie is my daughter with Cri-du-Chat; Mei Mei is my adopted Chinese daughter). I knew that she was thinking we were crazy for adopting after knowing we had a special needs daughter.

The above, I’m sure, is what most people think when they first meet our family. It may even have been your thought when you read our “About Me” page. I know that would be my first thought reading such a thing about another family. Are they crazy?

Honestly, I can only say it was a God-thing. Before Jie Jie was born, we fostered a newborn orphan for ten months. I was not able to adopt at that time due to my age, and we moved to a new city and couldn’t take her with us. She was almost a year old when we left her with a kind Chinese lady who we trusted. It was so difficult, but peaceful.

It was God’s plan.

After Jie Jie was born, we looked into the adoption process, but a few weeks later Jie Jie was very ill, which led to the mountain of tests and onto the summit of the result: Cri-du-Chat with silent aspiration. Our dreams of adopting were zapped. We really believed that  with her physical needs – and not to leave out the medical bills – there would be no way that we could even think about adopting at that point.

Two months later, back in our city in mainland China, we received the news that the little Chinese girl that we had fostered was taken back to the orphanage. We were mortified and sick. We prayed about it. Uwe asked me what was holding me back with adopting – was it Jie Jie’s needs or money. Jie Jie’s needs were not that “difficult”, we were able to feed her very easily and I was doing therapy with her at home. It was money. He felt the same. We decided right there that IF God was wanting us to adopt, then He’d provide the finances to pay off the medical bills and for the adoptions.

Long story short, God provided for all of those things to happen within two months. The surprise was that this little girl that we had fostered was not the girl God had in mind for us to adopt. In a matter of a few weeks, after we had our home study completed (which was a miracle to get an appointment so quickly), we found out that the fostered girl had been adopted.

Grief, sadness, mixed with anger swept my husband and I. Though, as we searched our hearts and God, we realized that His plan was this: To just use this foster girl as a catalyst to get Mei Mei into our family. (I believe He used it to cause the family who was fostering her to adopt her as well. She was back in their home in about two months time.) **By the way,we had asked this family if they were adopting or not and they had told us “No” in words, but in Chinese culture were telling us “Yes”. A lesson learned in culture clashing – in a later post, maybe.

We never would have seriously considered adopting had the foster child not been taken back. God used that tough situation to move us forward.

So see, I really can’t answer that question any other way. It really was God who brought Mei Mei into our family and I will be forever grateful that He did. I love that bundle of energy and passionate little girl.

The month of November is apparently Adoption Awareness Month. I really hadn’t heard of it until just last week, but what a great idea. There are so many children around the world in need of a home. Don’t worry, I’m not going to pressure you to make a commitment to adopt, but I would like you to at least give it a thought.

If you know you can’t adopt or even foster, what can you do to help these kids out? Ask the local social worker, schools, or orphanages how you can help them. At the very least, you could pray for these children to find forever families of their own.

Your Turn: If you have adopted share your story. It doesn’t have to be an overseas adoption. If you are thinking about it and have any questions, please ask. I will try to answer if I can. Please comment below.